A Garment of Military Origin

Yes, the piece of clothing I am wearing on the picture, is a Burberry trenchcoat, originally an item of clothing developed for the British Army during the First World War. It was once a military uniform that became fashionable in the decades after the Second World War.

I actually do not particularly like uniforms. Maybe it is because in my homeland Albania, I had to wear uniforms from my preschool age until my sixteenth birthday: the white kindergarten smock embroidered with my name “Jonela” was followed by the black shirt dress with white collar and red pioneer scarf around the neck later at school. Fortunately, the fall of the communist regime came on time. Otherwise I would have to wear once a year a khaki military uniform during the compulsury two-week military service. Just guess how old I am;-)

Last week at an event at the Longchamp store celebrating the twenty-fifth anniversary of the iconic Le Pliage bag, I had to smile looking at all those colorful nylon Le Pliage bags. Back in time at the Law School in Germany, I remembered all those female law students mandatorily carring one of those small size Le Pliages. The look was completed by small pearl earrings, a brand jeans, colorful brand polo shirts or V-Neck merino sweaters; for a more casual look, they tied the sweater around the waist. Again, the uniforms were somehow pursuing me, but the difference was that I did not have to wear that “uniform”, what I really never did …

Perhaps a blogger like Garance Doré would draw one of those pretty sketches with so lovely sounding French titles like “Le Glamour“, “Femme Française” or “L’Allemand Étudiante en Droit” or something like that. After all, I have a picture of me from last summer waiting for the train at the brandnew and very futuristic Italian train station of Reggio Emilia AV Mediopadana carring a Le Pliage maxi travel bag in red, but not paired by pearl earrings, jeans and polo shirt …. Perhaps some readers want to know which non-uniform-outfit was hidden under the Burberry trench of the first picture? It was a kind of United Europe outfit I wore end of September at the Frankfurt STYLE AWARD Gala: a vintage chiffon blouse by Giorgio Armani, a Stella McCartney skirt, shoes by Jean-Michel Cazabat, the handcrafted Cabaret-Clutch by Benedetta Bruzzhiches and a feather headpiece by Nanà Firenze (Italy, UK and France are represented). Some time ago, Mrs Stitz-Krämer, initiator of Frankfurt STYLE AWARD and owner of a PR agency, told me a story from her earlier career at Lufthansa. One day, a new sample uniform was introduced to the stewardesses. There were rumors this uniform was designed by a designer named Lagerfeld who at that time designed on behalf of various fashion companies. Everbody called it  the “Lagerfeld Uniform”. Despite her later research, Mrs Stitz-Krämer could not find out whether Lagerfeld really designed those uniforms for Lufthansa back at that time. So she and her team came up with the idea to chose the category “Uniform” additionally to the categories “Unisex” and “Unicult” as a contest motto for the competing young designers from all over the world at this year’s Frankfurt STYLE AWARD.

One can imagine that I was very curious, especially about the interpretation of uniforms by the young designers and I was not disappointed. I even had the possibility to try backstage my favorite design of Franz Schmidt “Gated Communities“. Here are some photographic impressions from the Frankfurt STYLE AWARD Gala at the Fraport Forum which took part end of September. It was a wonderful show demonstrating that even supposedly non-fashionable and banker-heavy cities like Frankfurt can host large fashion events. With Madame Dominique Deroche from the Fondation Pierre Bergé – Yves Saint Laurent and one of the young designers, Franz Schmidt. 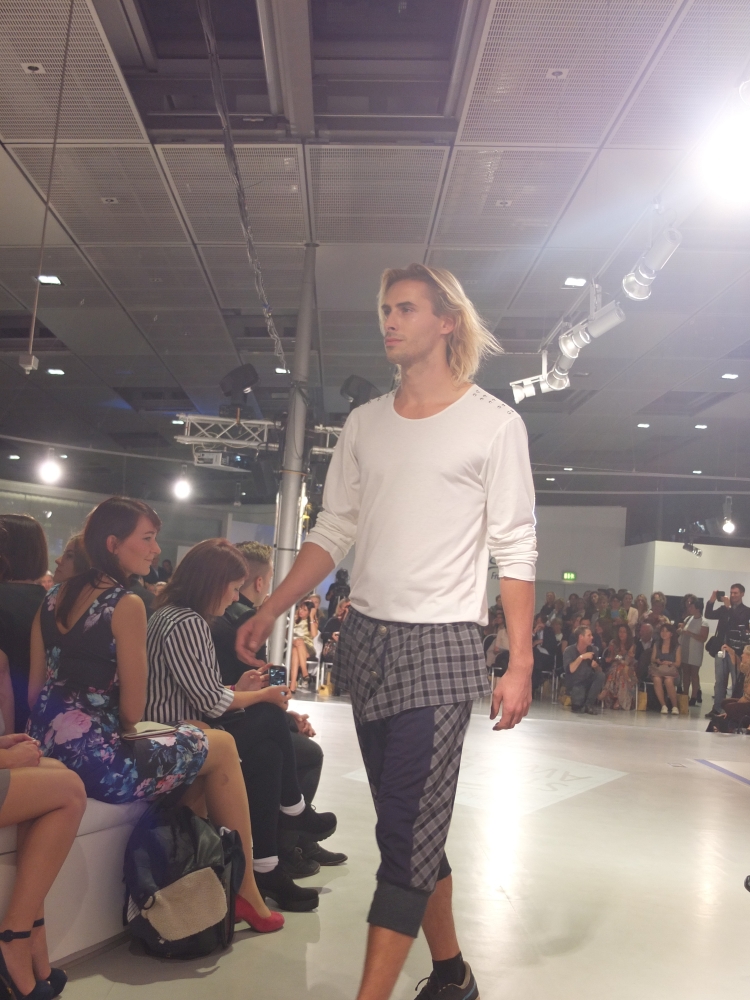 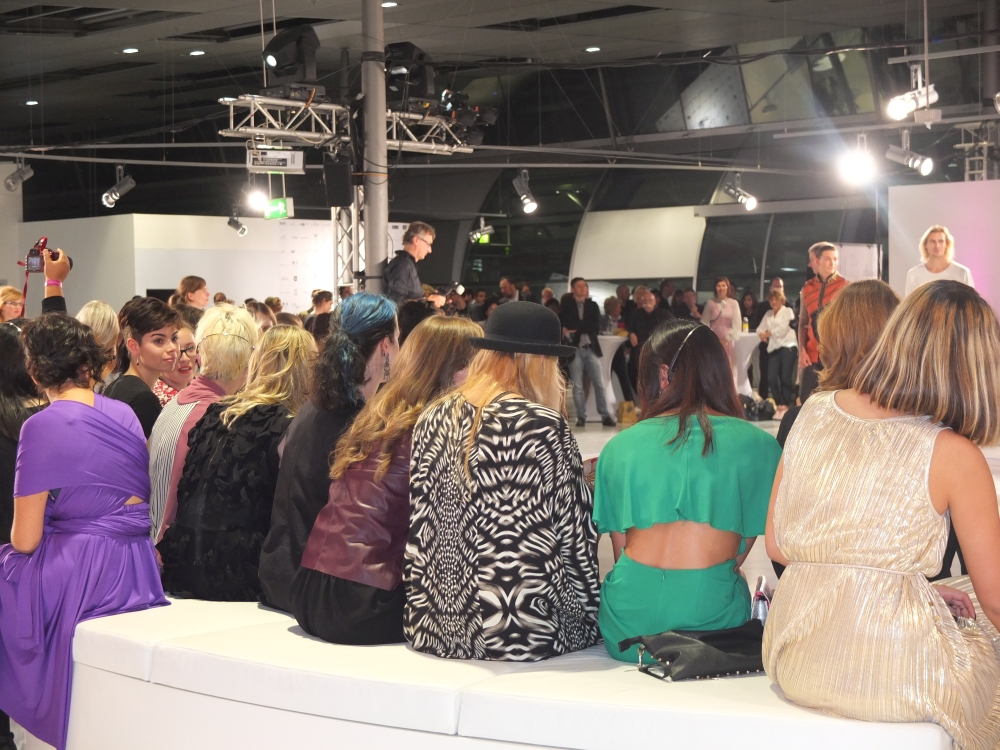 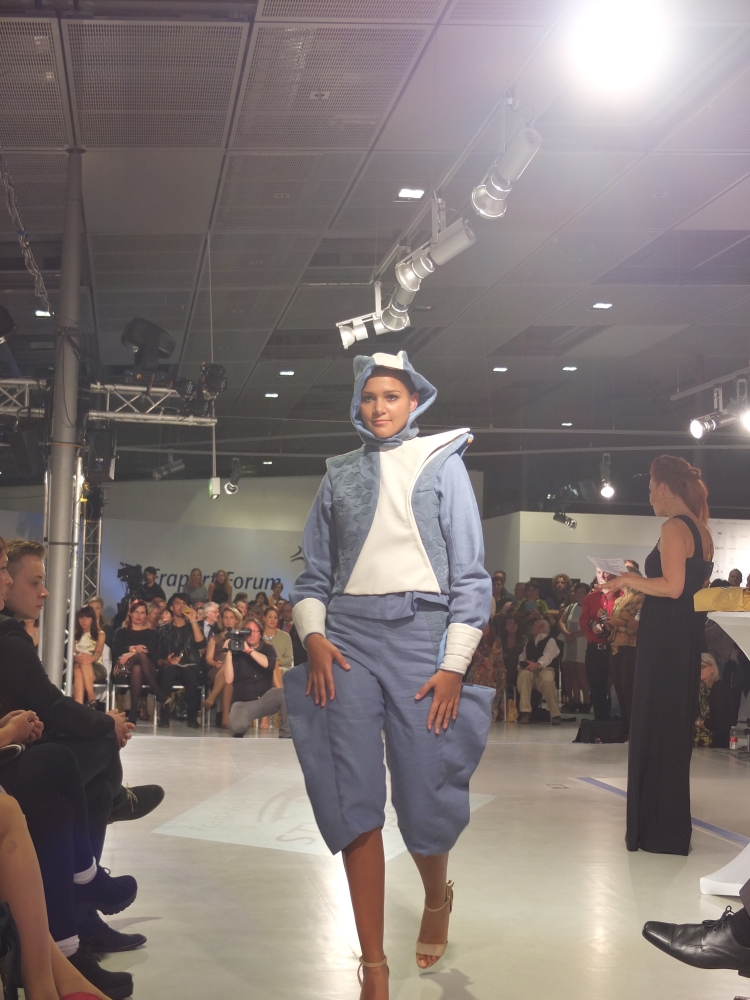 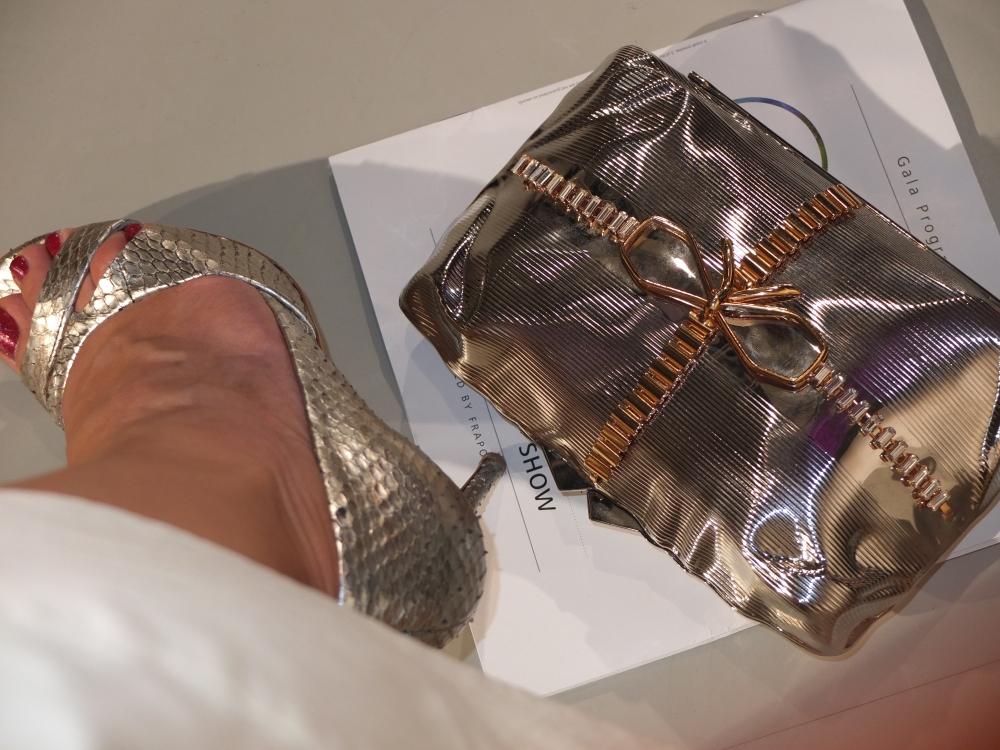 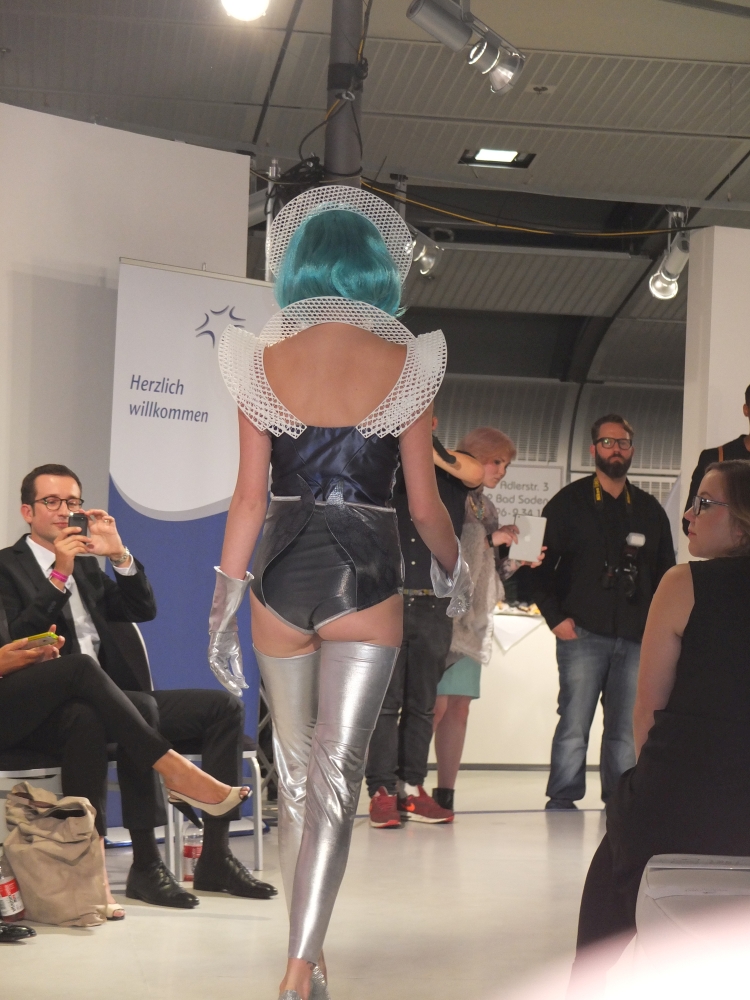 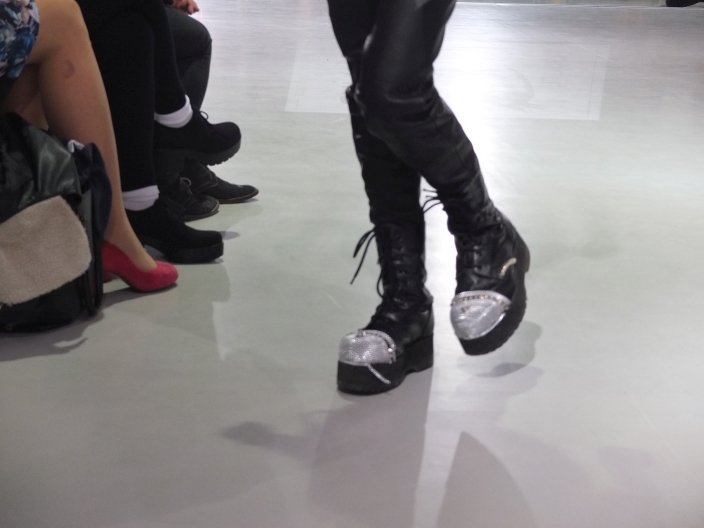 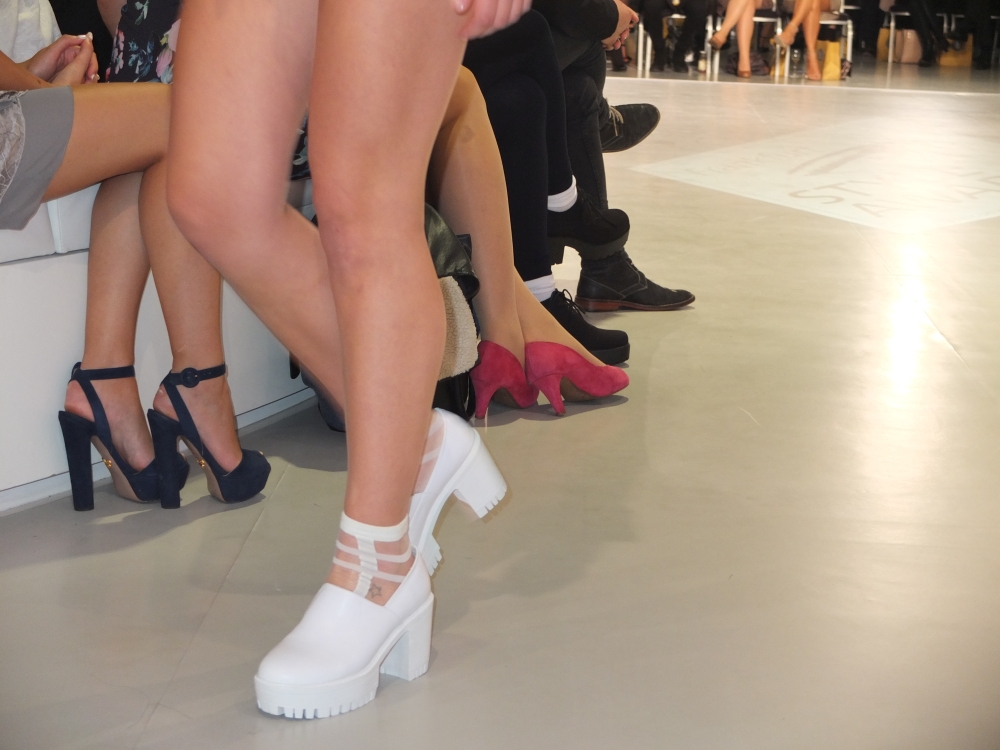 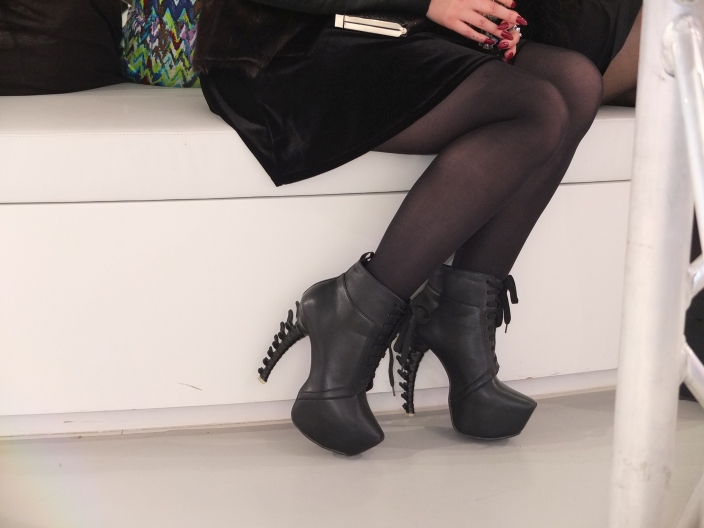 The designs will remain exhibited at Frankfurt Airport until February 2015.

Who knows, maybe one day there will be the ultimate uniform out there I would love to wear. I am sure the emerging young talents will come up with very good ideas….

One thought on “Uniforms: A Trilogy”